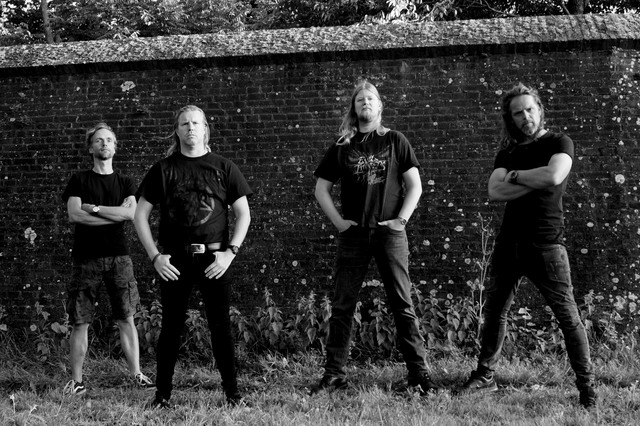 Left to right: Basterd, Pedro, Michel and Jos
Click on a name, or just scroll down for more...

After several years of laziness and boredom drummer Jos and guitarist Pedro hooked up once again after slashing the world to pieces with their former bands, the ungodly Desolation and brutal Zymotic.

They recruted former The Hype member Basterd for the position of bass player. In this formation DeadBeat wrote a couple of old-school tracks and performed them also live in places like The Cave (Amsterdam) and R17 (Grootebroek).

After a year singer/guitarist Pedro decided he wanted to focus only on the guitar and DeadBeat found a brutal true metal singer in the form of Michel. This giant front-man, who also emerges from Dead-area West-Friesland, immediately fitted into the thrashy style of old-school metal that DeadBeat plays.

After discovering some more bands as well as a record label with the name DeadBeat, the decision was made to change the band name. Short but straight, without anybody knowing what it means: KFFR was born (again).

In relative tranquillity KFFR wrote some heavy tunes and played a few festivals in the region.

In 2008 KFFR went into the Sureshot studios to record a couple of there songs for a demo. 8 songs where recorded in a few days. Compositions ranging from classic heavy metal like "Infected Flesh" to thrashier anthems as "Ultimate Pain Experience" or extreme aggression in the death/thrash tracks like "Mountains of Madness".

In 2009 KFFR made there tracklist even more dynamic by adding slower Sabbath-like doomy tracks as "Walking in Shadows" and "Master of Deceit" and mixing them with pulverizing powerthrash compositions like "Religion".

Come and see KFFR live when they are playing in a club or bar close to you!

Founding member Pedro plays the guitar and is responsible for most of the songwriting in KFFR. Drummer Jos and he have a long musical relationship going back to 1992 when they founded heavy metal band Desolation. His playing style is balancing between Sabbathian doom, staccato thrash and melodic Priest-like riffs. Pedro uses Engl amplification, Jackson guitars & Ibanez guitars.

It's in his name! Basterd plays the bass in KFFR. Basterd used to play in the legendary metalband "Hype" Since 2005 he is a part of KFFR. With his pounding, aggressive, but warm (finger)style of playing he is the glue between the rest of the instruments.

Since late 2005, Michel is the singer in KFFR. High pitched screams to deep grunts and everything in between, he does it all! Before playing in KFFR, Michel was the singer in rockband Stain. His gear: A Shure SM58 microphone with a long chord, a Samson XM610 Powered Mixer with two Koda MT33 speakers, and off course, a strong voice.